I can’t describe the pleasure of those small coffee shots while being in Naples and sharing the ristretto with so unique Pasticceria creations. It’s bizarre how I’m linked to this brew. Sure it is not due to my German roots, a bit maybe to my Spanish ancestors, like many migrants my godfather had some café-bars in Montevideo, I grew up with capuccino and espresso. Don’t blame my dad! But the other half of my genes is Italian. And no matter how many hipster roaster arise, the one and only espresso is Italian. Add while all over the world many coffee shops “only” have the classic espresso on the menu, the Italian coffee bars offer a wide range of variations: The Italians order their espresso (Italian “caffè”) for example as Caffè Macchiato, Schiumato, Doppio, Americano or Corretto. Two variants that very often end up in the coffee cup and are also becoming increasingly popular in our latitudes are the Caffè Ristretto and the Caffè Lungo. What is behind these terms and how the two espresso variants differ is explained here. Let’s have a look.

WHAT IS A RISTRETTO?

Literally translated from Italian, ristretto means “shrunk”. In fact, this espresso variant, which is particularly popular in the south of Italy, is a “shrunken” coffee. As with normal espresso, the sieve is filled with about seven grams of ground coffee. However, the ristretto consists of much less water than the espresso, about half. As a guideline, 15 to 20 millilitres of liquid are used. However, the amount of water used is always a personal decision of the baristas. It is said that the further south one travels in Italy, the less coffee ends up in the cup when ordering a ristretto. In the last year I tried a lot of espresso coffee and apart from the Italian the dm-espresso (a drugstore in Germany) and the espresso from Costa Coffee in the UK are amazing. From the masters I learned to love Costadoro. 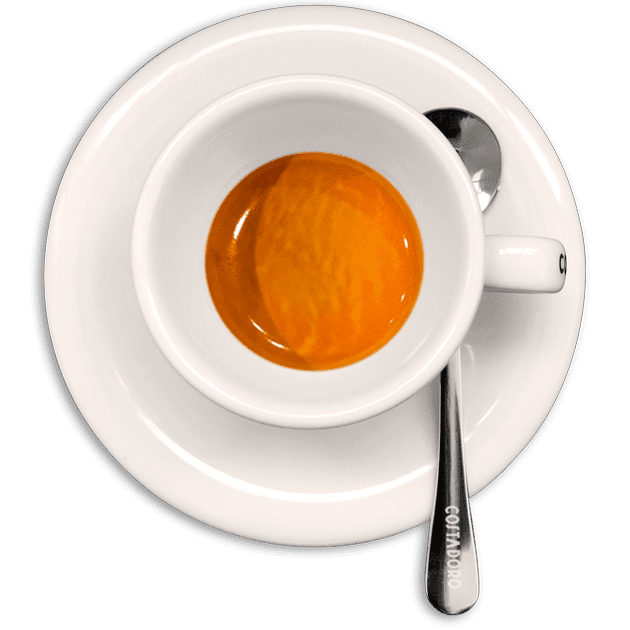 This blend is produced since 1890, so a bit of knowledge in there. But let’s move on with the lungo vs. ristretto dance. Due to the small amount of liquid, the ristretto is more concentrated and aromatic. Because the water only comes into contact with the ground coffee for a very short time, the concentrated caffè contains fewer bitter substances than a classic espresso. This naturally has a corresponding effect on its aroma. The ristretto can be brewed with the strainer as well as with the fully automatic machine: if it is not possible to regulate the amount of water in the machine, simply pour half of the water needed for an espresso into the machine. The easiest way to prepare a ristretto is to use the capsule machine: many roasting companies now offer ristretto capsules.

WHAT IS A LUNGO?

As even coffee connoisseurs without any knowledge of Italian will easily find out, the Caffè lungo is a “long espresso”. It is not known whether the name is derived from the larger quantity of water in the sense of “extended” or whether it refers to the longer processing time. One thing is certain: At least 60 milliliters of coffee ends up in the cup with the lungo, twice as much as with a regular espresso. However, seven grams of ground coffee are also used. Just like the liquid, the processing time of the Lungo doubles: it is between 35 and 40 seconds. The longer contact time with the ground coffee means that bitter substances get into the coffee. As a result, its taste can be perceived as slightly burnt and bitter. On the other hand, the coffee has time to develop completely new aromas, which would not be possible with a normal espresso, so as is so often the case, it is taste.

In order to reduce the amount of bitter substances in the final result, many baristas prepare a classic espresso of about 30 millilitres. This is served in a larger cup together with a pot of hot water. In this way, the guest can prepare his own extended espresso and determine how much he wants to dilute the espresso. This variant convinces coffee lovers with its mild and aromatic taste. In Italy, this preparation method is known as Caffè americano. Caffè americano is not to be confused with Caffè all’americano: in Italy, this means a filter coffee in the American or Northern European style.

The same number of grams of ground coffee and different amounts of water – which espresso is stronger, in other words, which contains more caffeine? Many people think of ristretto from the stomach – after all, it is more concentrated. But this is a mistake: not only is the ristretto more aromatic, it also contains less caffeine than the lungo. The reason for this is the different processing times: the shorter the water comes into contact with the ground coffee, the less caffeine the result contains. Since the Lungo espresso has the longest processing time, it is one of the Italian coffee specialities with the highest caffeine content.

And no matter how you enjoy you espresso, keep it real and honour the masters!